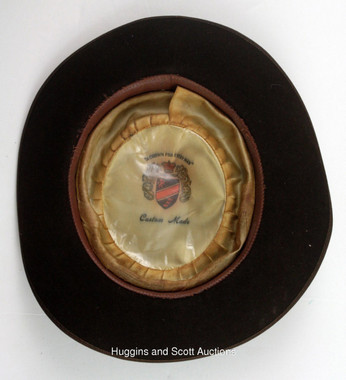 1940's brown felt Curly Joe custom made hat with moderate use. Also included are two handwritten pieces of documentation from Curly Joe's widow certifying that this piece of memorabilia was used in several film productions as well as being frequently worn during Curly Joe's burlesque shows in the 1940's and 1950's. I have not had time to watch every Curly Joe film and 3 Stooges production to verify which films exactly this hat was used in. Three Stooges authentic memorabilia is almost impossible to obtain. Most was either discarded after production or is in the Three Stooges musuem