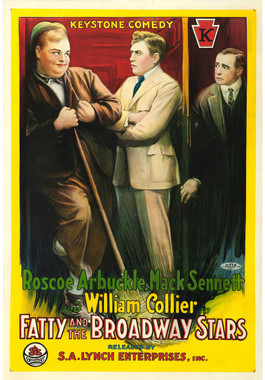 Fatty Arbuckle directs this silent comedy in which he also stars as a hapless sweeper who manages to disrupt a series of shoots on a film lot, with every major Keystone player appearing as themselves (with emphasis on the Broadway stars) -- Mack Sennett, William Collier, Mae Busch, Chester Conklin, Polly Moran, Al St. John, and Ford Sterling to name just a handful

Restoration has the poster display-ready after carefully addressing small chips in the borders, image area, and lower section of the poster (Arbuckle's legs, and in "Sennett" and "Arbuckle."), and a larger chip in the lower left border just below the studio logo. The colors are well saturated and the overall impression of the poster is quite pleasing.