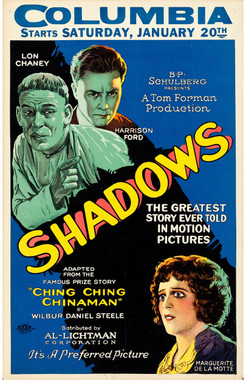 One of silent star Lon Chaney's strongest performances, this compelling picture transforms him into the humble Chinese laundryman Yen Sin, whose houseboat washes ashore in the conservative Christian town of Urkey. At first despised and reviled as an outsider and a heathen, Yen Sin proves himself a man of courage, integrity, and compassion, all the while never losing his deep humility. The film's title was changed to Shadows from Ching Ching Chinaman, as it was feared that the movie-going public would not accept a heroic Chinese character in a leading role. Nevertheless, the film was a smashing success, both critically and commercially. Many today consider this one of Chaney's finest performances.

Minor signs of handling include slight edge wear, a lower right corner bend, and a vertical crease towards the bottom